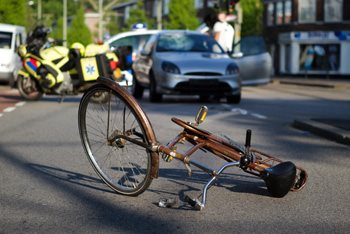 B. A stationary, contact bike accident is result
of a cyclist having impact with a stationary object. Some of the most common
stationary, contact bike accidents occur as a result of the opening of a car
door as the unsuspecting cyclist passes. This is known within the biking
community as “Dooring”. Dooring can not only be dangerous for the cyclist, but
can also injure the individual exiting a vehicle. Dooring can also result in
damage of personal property.


In many cities, there exist bike lanes, which are
areas of roadways that are specifically designated for the operation of bikes
and cyclists. Due to the fact that bike lanes exclude automotive vehicles, this
allows for lessened opportunities for bike accidents to occur.

Although there are no nationwide, uniform
designating symbols for the identification of bike lanes, they can be found on
either side of the street. While some cities display a bicycle symbol in order
to designate bike lanes, other cities illustrate bike lanes with alternate
coloring.

The laws for safe cycling vary from state to state
and country to country. Adherence to safe bicycling protocol is the most
effective way to avoid bike accidents. In the busiest cities, cyclists must not
only adhere to all vehicular traffic laws, but must also ride “with traffic”. This
means that cyclists must operate their bikes in the same direction as the flow
of traffic. However, in residential areas, cyclists may be permitted to ride “opposite
traffic”.

A. Bike accidents can result in both physical
injury and pain and suffering.

B. Bike accidents can result in damaged property.

C. Upon sustaining damage or injury as a result of
a bike accident, one is encouraged to consult with legal representation in
order to investigate options of recourse and compensation. Regardless of the
nature of the accident, compensation can be awarded without direct contact
between a bike and another vehicle.