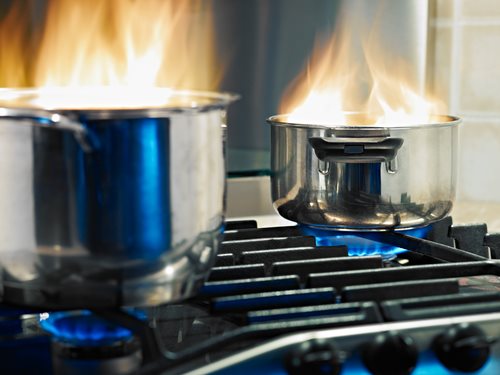 October 7-13 is Fire Prevention Week, and the Consumer Product Safety Commission (CPSC) and the Fire Administration (USFA) have partnered to provide new statistics on home fires in America in recognition of Fire Prevention Week.  The two organizations are encouraging all Americans to install enough smoke alarms in their home and develop an escape plan as well.

According to a new report released by the CPSC on October 9, 2012, about 366,700 “unintentional residential fires” occurred between 2008 and 2010.  These fires caused 2,310 deaths, 12,550 injuries and over $7 billion in property damage.  The top cause of residential fires: cooking equipment.
Cooking equipment caused about 147,400 fires between 2008 and 2010, roughly 40 percent of all the residential fires.  The most people were injured by fires related to cooking equipment as well.  About 27.4 of all fire injuries were caused by cooking fires.
The CPSC reports that heating and cooling equipment was the leading cause of fire death.  The equipment cause about 210 death between 2008 and 2010, and portable heaters caused 100 of these deaths.
CPSC Chairman Inez Tenenbaum stated, “Six people die every day in home fires.  The early warning provided by smoke alarms can make a big difference.  Consumers who have working smoke alarms in their homes die in fires at about half the rate of those who do not have alarms.”
The CPSC and the USFA recommend that homeowners interconnect all of the smoke alarms in the house.  The alarms speak to each other and all go off if there is a fire in one part of the house.  The two organizations recommend installing an alarm on every level of the house and all sleeping areas.  Make sure the alarms are connected to house wiring but have battery backup as well.
Source: U.S. Consumer Product Safety Commission