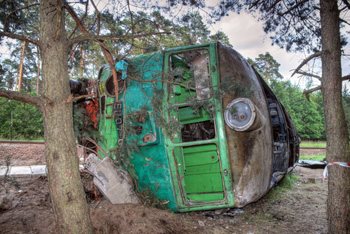 A train accident is classified as any accident that takes place involving a train, locomotive, subway, or other regulated vehicle designed to operate on a railway system. The fact that trains are confined to tracks allows for their use to be both some of the most direct means of transport, as well as some of the most complex. Unlike free-wheeled vehicle, such as a car or a bicycle, a train cannot rotate or alter the direction in which it travels. Yet, a train can alter the speed and velocity in which it travels, as well as move backwards or forwards.

There are two primary types of train accidents: operational train accidents and external train accidents. Furthermore, trains, regardless of function, must possess insurance and liability in the event of an accident and/or malfunction. The possession of insurance is a legal imperative for all trains ranging from commercial trains to commuter trains.

1.Operational Train Accidents are classified as train accidents that occur as a result of negligence on the part of any or all operators of a given train:

Navigational train accidents are the result of negligence and/or malfunction on the part of those employees responsible for guiding the train(s), which includes the failure to switch tracks, alert the conductor of upcoming rail traffic, and flawed routing. Furthermore, the malfunction of bridges, gates, and cautionary measures that alert motorists, pedestrians, and other entities from crossing the train’s path are the responsibility of the train company.

Mechanical train accidents are the result of uninspected machinery, faulty parts, incomplete inspections, and unchecked or unhindered tracks. Employees responsible for the maintenance and upkeep of both the train, as well as the tracks utilized by the train, must adhere to the inspection regulations set forth by the Department of Transportation (DOT).

2.External train accidents are classified by unpreventable and/or anomalous occurrences that are not the liability of the train company. In the event that the train, its mechanics and tracks are in working order, external forces causing or contributing to a train accident can be assessed by investigators and other law enforcement personnel. Examples of external train accidents include the failure of individuals to adhere to train crossing warnings and/or unlawful entry onto railroad tracks.

Train operators must adhere to a strict code of operations. Commercial trains must operate safely within the scope of their surroundings. Commuter trains must operate in a safe manner that protects the health and well-being of its passengers. In the event of a train accident, an attorney specializing in transportation codes, regulations, and operations can assist in the investigation of case details reflecting a train accident.